It is with great sadness that we have to report the passing of our Society president and good friend Les Sayer.

Les lived a varied and textured life. He served as a Telegraphist Air Gunner (TAG) of the Fleet Air Arm during the Second World War, flying in the Fairey Swordfish. TAGs were responsible for providing Morse code communications as well as protecting the aircraft with a machine gun.

While stationed on the aircraft carrier HMS Victorious in 1941, he took part in the final , vital attack on the German battleship Bismark. His squadron were part of the first wave which crippled the famous ship with torpedo bombing. He was awarded the Distinguished Service Medal (DSM) for the part he played. This and other memoirs were featured in the book “Tag On A Stringbag” which Les co-wrote. You can find out more about these remarkable aircraft at the Navy Wings charity.

Upon leaving the Navy, Les spent over thirty years in a civil aviation career flying with airlines such as British European Airways (some of his journeys even took him into the realms of cold war espionage!) and he eventually became a Training Manager for BOAC. 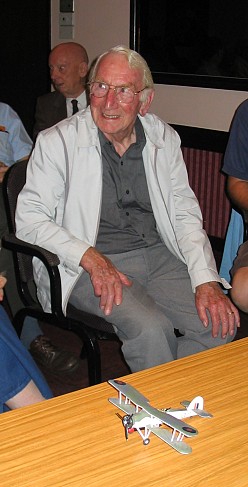 In the 1997 New Years Honours, Les was awarded the MBE for his service to the Telegraphist Air Gunner Association – a group set up to help the surviving TAGs.

In 1990, the Society broadcast an appeal on local radio for help in setting up an astronomy observing location and it was Les and Val Sayer who answered. They were both made honourary life members and it led to the creation of our Munday-Sayer Observatory.

The Society owes much to Les. He was a fascinating, unpretentious man who will be sorely missed. Rest in peace.

Update 14/11/08 – links to articles in the national press about the life of Les:

This site uses Akismet to reduce spam. Learn how your comment data is processed.